Rupesh Tillu: Interactive theatre is especially relevant in these times 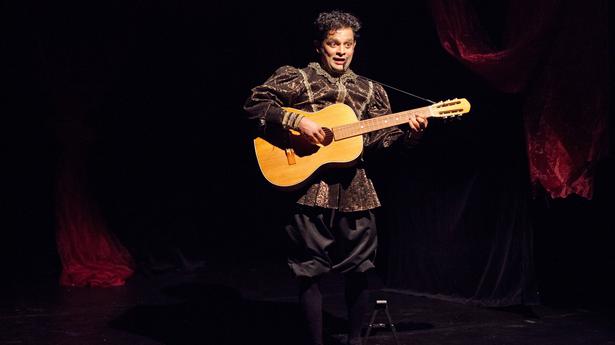 Ahead of staging his physical comedy act ‘Madbeth’ in Hyderabad, the actor shares how he channelised the grief of his father’s passing away

Ahead of staging his physical comedy act ‘Madbeth’ in Hyderabad, the actor shares how he channelised the grief of his father’s passing away

Trained in physical theatre and clowning, when Rupesh Tillu presented Madbeth in December 2009, the 25-minute solo show’ had to compete with television. Now, more than a decade later, the physical comedy act has evolved into a 75-minute interactive presentation and its biggest challenge comes from social media. “There is interesting stuff going on all the time but none of them can offer a tactile experience and be interactive,” he says. Ahead of his Madbeth show on May 14 in Hyderabad, the actor/filmmaker shares, “While travelling in a Mumbai Metro, everyone is busy with their phones and appears isolated unlike the times when people would talk to each other. That is why theatre, especially interactive theatre, is important in these times.”

A theatre piece loosely inspired by Shakespeare’s Macbeth, the production blends devices such as slapstick comedy with acrobatics, mime, song and improvisations. Rupesh incorporates changes depending on the country‘s audience. Madbeth is intentionally kept in simple English so that people around the world can connect to it.  “The audience-artist link is vital; I’m not on stage to show my skills but to be with the audience.”

The second lockdown affected Rupesh deeply as his father passed away due to COVID-19.  “It was painful to see the death of a person due to COVID-19. I witnessed how the human body went from being fit to becoming ventilator-dependent and then gone,” he recollects.
The ‘best he could do’ as a theatre person was to channelise his grief to create. On the tenth day after his father’s death,  he did a workshop with Vir Das for his comedy show. “I do theatre because of my father. He would take me to different places to watch theatre productions. He lives with me in my theatre. Though it is painful, theatre teaches catharsis. One experiences high and low points but theatre teaches you to be objective about life and also to be in harmony with your feelings including anger and sadness.”

As part of his 10-year-old initiative ‘Laughter Per Kilometre’, the team travelled 10,000 km in 2021 to Wada, where he created a theatre residency, and interiors ofPalghar district in Maharashtra and made 35,000 children laugh with more than 150 shows. “Our primary target is tribal children and children of sex workers. We took our performances to places where children had never experienced theatre.”

Rupesh’s busy summer continues after Hyderabad as he turns into an acting coach for Pavan Kriplani’s Gaslight, then directs two short films, teaches clowning for five weeks at the National School of Dramatica in Sweden and Prague and stages a couple of Madbeth shows in Stockholm.

Currently, he is working on Clown Democracy, a piece that explores the idea of democracy using clown philosophy and principles.

Madbeth will be staged at Rangbhoomi Spaces on May 14. Tickets are on bookmyshow.com

Ranveer Singh: I am lucky and blessed to be Deepika’s man – Exclusive! – Times of India

Analysis | How Covid Made World’s Trash Problem Much Worse